You may have noticed frequent circulars from mutual fund regarding a change in the total expense ratio (TER). Sometimes these announce an increase and sometimes a decrease in the TER. In some instances, particularly directly plans, the drop in TER is significant. This is followed by a reversal a few months later.

We present TER history along with changes in direct plan and regular plan AUM and show that the sudden decrease in expenses is an invitation for the investor to buy units. Once the AUM is high enough, the AMC increases the expense ratio profiting from the extra AUM.

In Feb 2018, SEBI issued a circular noticing the frequent changes. However, all they said was, the change was to be notified to investors. So instead of changing expenses at will without informing investors, now AMCs, cite this circular and report the changes. Nothing has changed.

The direct plan TER of this fund was changed from 0.2% to 0.6% in Sep 2019. If we look at the expense ratio history of the fund, they had made such changes before.

The impact of the Sep 2019 change will take a while to manifest because AMFI stopped updating NAV each month! 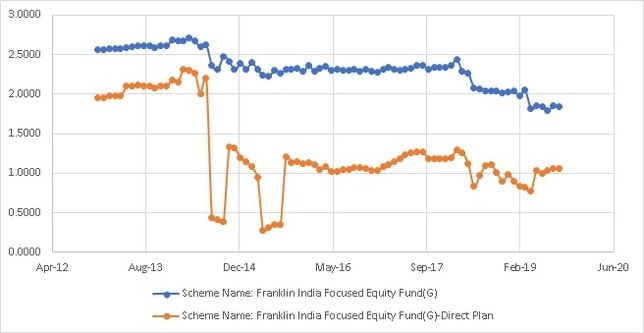 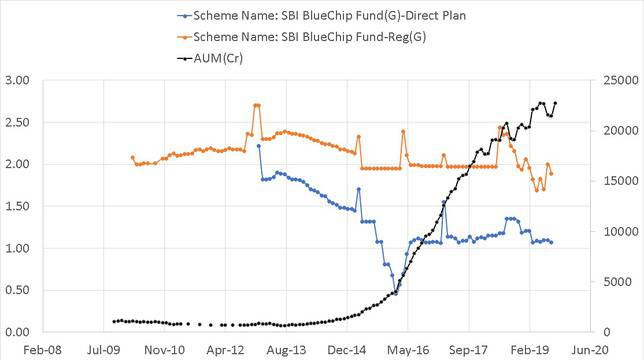 Notice the big dip in the direct plan expenses. Between Jan-Mar 2016 and Apr-June-2016, the direct AUM of this fund grew by 83%. Hence the AMC promptly jacked it up. The question is, why the direct plan expense come down gradually in the first place? It looks almost as if the AMC anticipated this influx into direct plans, made the fund invited and increased it later. They did not have to intimate this to investors at that time.

The expense ratios of the direct and regular plans are shown below, along with the AUM growth (blue line, right axis). Look at that huge drops in the orange curve. That is the AMC baiting the direct crowd. 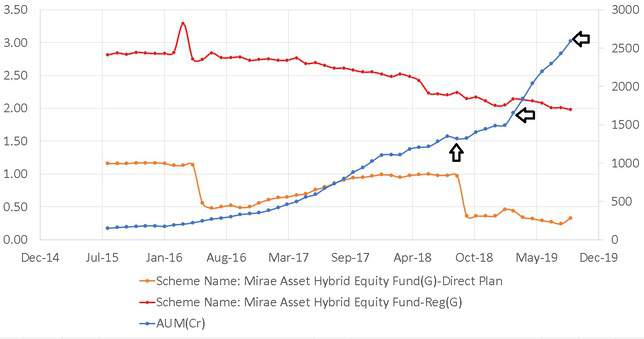 Now, let us look at the AUM break up (in Lakhs) and growth during the months marked by the arrows. Source: AMFI 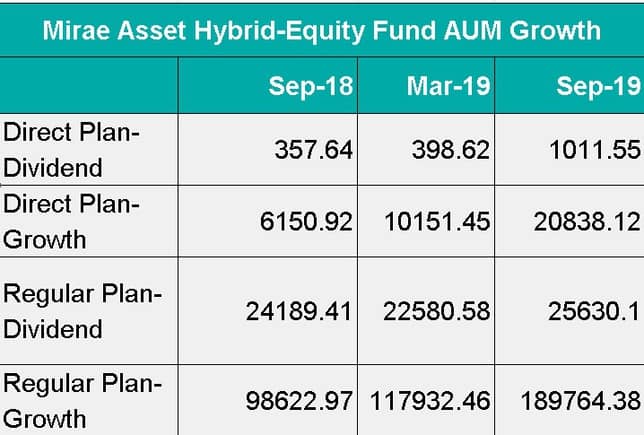 This is the growth rate over these months. 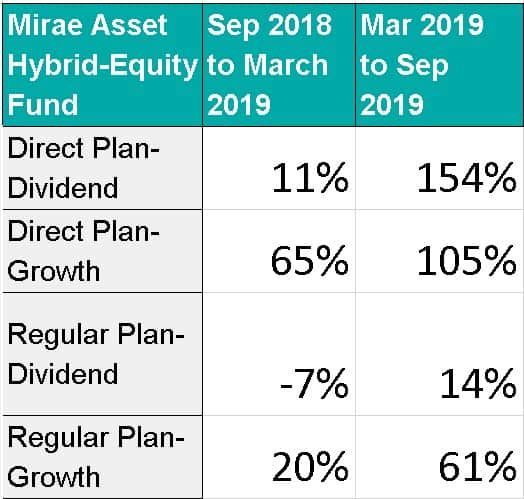 The direct AUM has grown much more because of the low expense ratio. Lowering the expenses and allowing the AUM to grow and then gradually increase it seems to the plan and norm across AMCs.

Why do the AMCs decrease and increase Expenses? It is a “classic” trick. Make something less expensive and increase the AUM. Once enough AUM has accumulated, jack up the expenses and book a neat profit. Everyone seems to do this, and the AMCs mentioned above are merely illustrative examples.

How are they able to increase direct AUM with such TER drops? This is a more interesting question. One can only speculate. It appears as if AMCs are using their own channels and perhaps are “collaborating” with direct fund portals to increase the AUM when the TER drops. No other explanation seems even plausible in an industry still dominated by distributors.

Why is this wrong? Expenses are a significant investment consideration in mutual funds. If fees are decreased only to increase AUM and then reversed, it is deceptive and misleading.  It is also a trap, especially in a debt fund as investors will have to pay tax as per slab (plus the higher exit load) if they exit.

What should SEBI do?